LANGUAGE English
AGE adults and kids 7+
WHEN Sat 23rd February, 5 pm
WHERE An Taibhdhearc
DURATION 90 min
GET YOUR TICKETS HERE

ILLEGAL: the making of a graphic novel with live Soundtrack by Séan Mac Erlaine 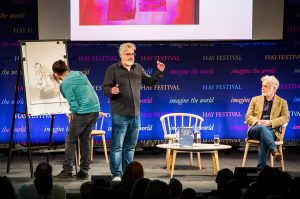 A fascinating glimpse behind the scenes of ILLEGAL the award-winning graphic novel by Eoin Colfer, Andrew Donkin, and artist Giovanni Rigano.
ILLEGAL tells the story of one boy’s epic journey to Europe.  Andrew and Gio will talk about the process involved in putting together ILLEGAL.  From their initial thoughts and ideas, through location sketches, to script, to storyboarding, final artwork, and publication.  Giovanni will be live drawing on stage during the event.
Illegal won the Judges’ Special Award at the Children’s Books Ireland Awards in May, and the UK paperback edition was released in August. Illegal is also currently nominated for the Carnegie Medal and Kate Greenaway Medal.

In September they, along with Illegal co-writer Eoin Colfer, went on a promotional tour for the US release which had a first edition print run of 75,000 copies. 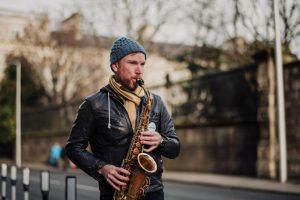 Seán Mac Erlaine is a Dublin-based woodwind instrumentalist, composer and music producer, recognised as one of Ireland's most forward-thinking creative musicians. Seán's work intersects folk, free improvisation, jazz and traditional music. He also collaborates with a range of non-musical artists, particularly in theatre and radio.

Mary Barnecutt plays with ensembles across most genres of cello playing from free jazz improvisation to being the principal cello with the Dublin City Chamber Orchestra. She has written music for short films, theatre, dance productions and many educational projects. She is also currently performing with Teac Damsa’s production of Swan Lake/Loch na hEala on tour which she has toured to South Korea, New Zealand, Canada, UK, Hong Kong and Australia.

Matthew Nolan is a Dublin based musician, music curator, and academic. He was the founder and artistic director of 3epkano from 2004 to 2015, an instrumental music ensemble who specialised in the production of original music for movies from the silent era. Over the last 10 years, he has been involved in producing new music for several award-winning Irish films including Exile in Hell, Runners, and Somewhere Down the Line. He teaches Film Studies at Dublin Business School and Trinity College Dublin.

The event features a special screening of a short film by artist Kelvin Akpaloo.
Kelvin Akpaloo is an Irish artist of Ghanaian origin. Kelvin is a choreographer and a performer, and a member of Street Arts Academy. He has worked on youth projects with Tallaght Community Arts and also internationally.